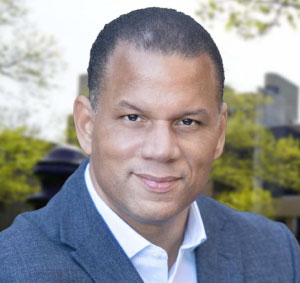 Kyle Farmbry, J.D., Ph.D., began serving as the 10th President of Guilford College on Jan. 1, 2022. Previously, Kyle served as a professor in the School of Public Affairs and Administration (SPAA) at Rutgers University- Newark. From August 2013 to July 2019, he was Dean of the Graduate School at Rutgers University-Newark.

Prior to joining the faculty of Rutgers, he taught at the University of Texas at San Antonio, San Diego State University, and Grand Valley State University. In 2017-18, Kyle served as an American Council on Education (ACE) Fellow. In this role he worked with the Vice-Chancellor (President) of the University of Pretoria in South Africa and examined university-based innovation and the implementation of the University of Pretoria – Mamelodi Campus’ anchor institution strategy. In 2016 he served as a Fulbright Fellow examining European Union immigration policies — with an emphasis on the challenges and management of the North African refugee movement and integration in the nation of Malta. In February 2009, Kyle was selected as one of 35 people from around the world to serve as a Fulbright New Century Scholar. In this role, he was engaged in research examining factors of youth entrepreneurial and civic engagement in South Africa. In May 2016 Kyle launched the United States-South African Higher Education Network, an effort aimed at building enhanced collaboration between higher education institutions in South Africa and the United States. In November 2017, he served as one of the founding members of the University Alliance for Refugees and at Risk Migrants, an effort which aims to engage universities and their communities in local and international advocacy efforts on behalf of refugees and at-risk migrants.

Kyle’s research and programmatic work has been supported by the Open Society Foundations, the South African Department of Higher Education and Training, the United States Fulbright
Commission, and the United States Embassy in South Africa. He is currently working on a project entitled Building a Pipeline for Executive-Level Diversity, Equity, and Inclusion Strategies, which is funded by the IBM Center for the Business of Government. Kyle has served on the Board of Trustees of The George Washington University. In November 2021, he was inducted as a Fellow of the National Academy of Public Administration. Kyle received his B.A., M.P.A., and Ph.D. degrees from The George Washington University. He completed his J.D. degree at the Rutgers University School of Law.